The VEGA vocational diplomaÊ- Vehicles: electronics and management of automatic systems – is a French 3-year course which trains technicians the field of on-board electronics, including diagnostics and multiplexing. As part of the course, the students have to become familiar with the various hardware and software resources used in the field, including Exxotest products.

The principle of the procedure is as follows: a rheostat is connected in parallel to the battery of a vehicle (a Peugeot 508 SW) which constitutes a load and thus draws various current values, as measured using a current clamp. The Exxotest unit is then connected to the corresponding LIN network and the associated frames are recorded using the Muxtrace software. The students must then isolate the identifiers which indicate the information relating to the BECB and then decode this information; particularly that relating to the current consumed. 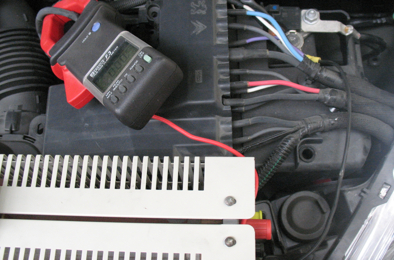 Another example is the study of the unfastened seatbelt warning on the vehicle’s second LIN network. The first stage is an analysis whose purpose is to identify, using Muxtrace, the bits affected by the fastening of the front and rear seatbelts, depending on whether or not passengers are present. The next stage involves the students activating the various unfastened seatbelt alarms directly via Muxtrace.

The MuxDiag II unit combined with Muxtrace software provide a complete solution for the analysis and transmission of CAN and LIN frames. The intuitive approach and ease-of-use is appreciated by students.